Today, Jackson Square Ventures is excited to announce that we’ve closed our third and largest fund of $193 million. We are proud of the meaningful relationships we have formed with the entrepreneurs leading the 30+ portfolio companies from our first two funds. We are honored by and thankful for the trust that our limited partners—both existing and new—have placed in us to continue doing what we do best.

Launching a new fund presents an opportunity to reflect on what makes our firm different and how those attributes have contributed to our success. This is best articulated in our Anti-Hype Ethos.

Sound advice and a great reference point when we discuss our investment philosophy at JSV. While venture capitalists are notoriously energized by big, audacious, world-changing ideas, there are fundamental rules of investing and human nature that will not change over the next 10 years—or even the next 100—that should not be ignored. Let’s dive into those, shall we?

Across the investment landscape, it’s generally understood that to generate massive returns, you need to be both non-consensus and right: 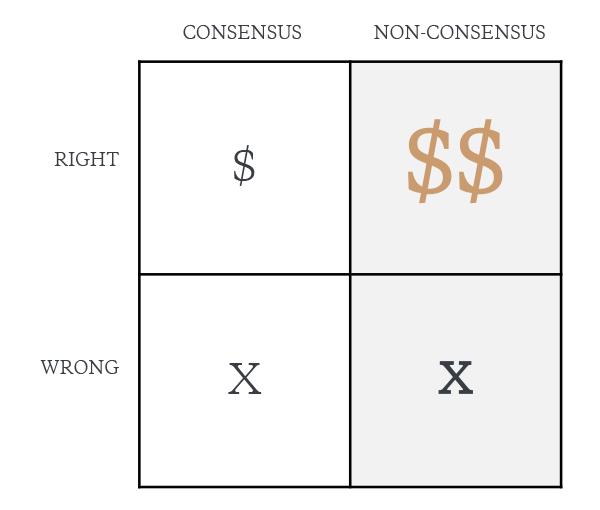 The principle captured above is straightforward: investments that fall in the consensus and right category are subject to higher entry prices, greater costs of execution, and muted exit prices due to increased competition. Investments that are non-consensus and right, on the other hand, tend to operate in a less competitive environment, increasing the magnitude of positive outcomes.

But, it’s exceptionally difficult to consistently land in the non-consensus and right category. It begs the question, should we only bet on crazy ideas that everyone else thinks are stupid? That is the most commonly glorified story. It looks like this:

We believe there’s a more straight-forward and rational way to be both non-consensus and right. To explain it, let’s start with the Hype Cycle, courtesy of Gartner: 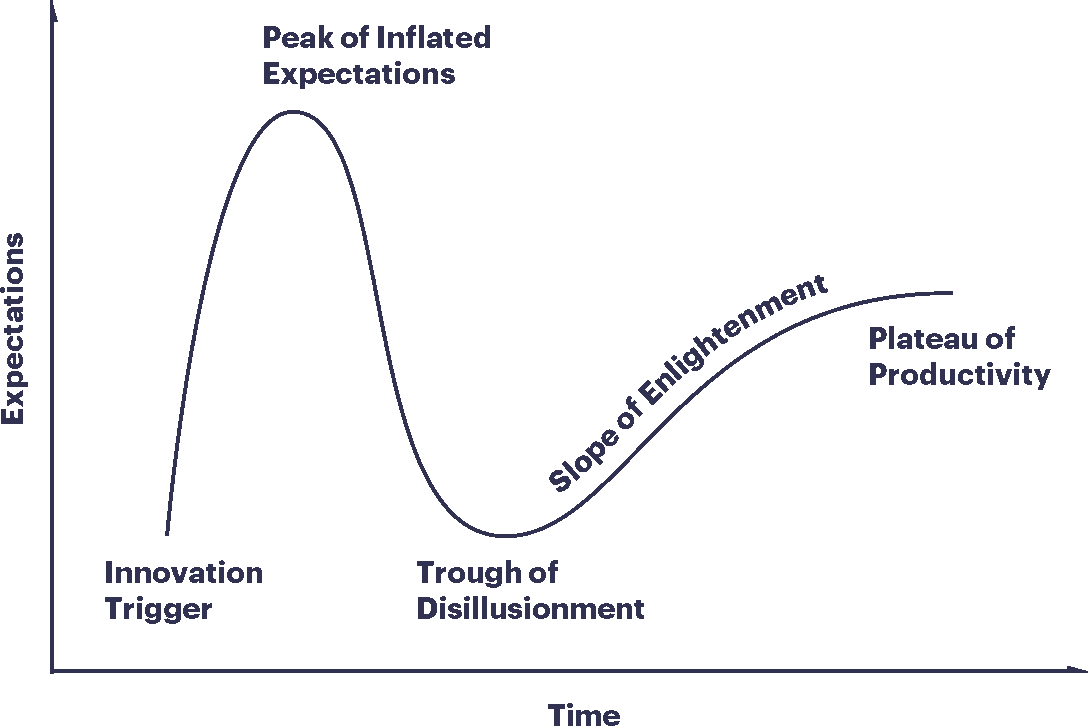 The hype cycle isn’t really about technology—it’s about human nature. The new-new is discovered, hyped, and then abandoned en masse. We offer the Tulip mania of the Netherlands in 1630 as highly illustrative of the pernicious effects of hype: skyrocketing prices followed by a freefall and return to price levels that should have been all along.

A more private example—I heard this from an institutional LP:

“Well, I think I should invest in Bitcoin because my peers are doing it and I don’t want them to get ahead of me.”

Headlines and comments like this exemplify the consensus mindset. If you look for social proof from other investors, you are focused on the consensus. Such consensus thinking leads to average results—a regression to the mean if you will—and average results in venture capital are not good enough given the sector’s illiquid nature.

The surest path is to actively shun the herd, investing extremely early—frontier investing as some call it—or a bit later, in what Gartner calls the Trough of Disillusionment. The latter is where we focus.

Frontier investing is too risky for our taste as returns are dependent on the power law dynamic and quite a bit of luck, while losses are often high. Anti-Hype Investing, on the other hand, can result in consistent wins, low losses, and the occasional outsized win (read: fund returner).

At JSV, our collective lifetime track record, comprising more than 18 years of investing, shows losses that are half the sector’s average, while our “hit rate” of companies achieving exits and/or valuations in excess of $1B is greater than 10 percent (and keep in mind that our entrypoint is generally Series A).

So what are the principles of Anti-Hype Investing? Here’s a breakdown of our philosophy:

Be comfortable with non-consensus

You cannot rely solely on social proof or the team’s prior success, nor base decisions on which other investors are involved. Be very wary when the vast majority of other investors you know are “looking at the space” a given company is in.

Rely on customer diligence above all else

When a company is in the anti-hype zone, it may not be getting a lot of investment offers, but customers tend not to care about that. Customers will do the diligence for you—you simply need to ask them. Trust customer feedback over other signals. Try to sell the service to your friends and colleagues. Join a sales call. Listen intently to users and prospects.

Our investments are based on relatively mature technologies being applied to massive, untapped markets. Think cloud software, mobile, and marketplaces, which we (still) believe represent some of today’s most exciting opportunities. More importantly, we know these sectors well and can apply the lessons learned to industries that are yet to transform.

Be in it for the long run

Conventional venture wisdom says to shoot losers early. For us, this approach is fundamentally flawed as long as our original investment thesis remains intact. Outsized returns require conviction and effort through challenging times. We have a long history of unwavering support for our portfolio companies through both good times and bad, and it’s paid off for us—time and time again.

What does an anti-hype company look like, specifically? A snapshot of our portfolio is a good place to start: Alto Pharmacy, Crexi, Demandbase, DocuSign, Upwork, OfferUp, Seismic, and Strava. Anti-hype investments are made in companies with great teams (table stakes), attacking massive (sometimes “boring”) markets, with well-established technology (in the trough), and relatively weak (non-innovating) incumbents. In many cases, they applied new business models enabled by technology to go after incumbent companies or industries. They were not media darlings when we invested.

The Anti-Hype Ethos is what makes Jackson Square Ventures different. Our investment decisions are grounded in customer adoption and business fundamentals, combined with clear, well-understood technology and markets. It involves investing in industries that may be overlooked by others or written off as uninteresting. And of course, Anti-Hype investing is frequently done outside of SF Bay Area—half our deals are outside of Silicon Valley and we frequently invest in first time founders.

We view our approach as patient and quietly confident. It is intellectually and psychologically challenging, but financially rewarding. JSV’s existing Managing Directors—Josh Breinlinger, Greg Gretsch, and Pete Solvik—are thrilled to continue doing what we do best with this new fund. We’re also excited to announce that Victor Echevarria, who joined us in 2018 as a Principal, has been promoted to Partner.

This is still just the beginning of the JSV legacy. If you share our beliefs, come talk with us, we’d love to chat.